by author
in Sports
0

Of course it had to be a penalty. Every law of poetic justice decreed so. And of course England’s captain missed it. In extra time. But this time there was a twist. A fraction of a second after pushing his spot kick too close to the outstretched Kasper Schmeichel, Harry Kane lifted the rebound into the net to propel England past Denmark 2-1 and into the final of Euro 2020.

It was a goal to boost a nation and help salve the sores of so many bitter defeats. As one, almost 60,000 supporters in Wembley stadium, and a nation watching in their homes, leapt to their feet and cried to the skies, none more so than England manager Gareth Southgate, whose own penalty miss in the semi-final of Euro 96 cost England a place in that final.

“We’ve given our fans and our nation a fantastic night and the journey carries on for another four days,” Southgate said. “We’ve said we want to create memories … I’ve said to the young ones (players) ‘it isn`t always like this’.”

It certainly isn’t. Whether it was that 1996 Euros loss to Germany on this same Wembley pitch, or the World Cup penalty shootout defeat at the hands of Argentina in St Etienne 1998, or heartbreak against the Germans in the 1990 World Cup semi-finals in Turin, England fans the length and breadth of the country have penalty horror stories to recount.

So it was somehow fitting that a penalty – a slightly scuffed one at that – should decide this semi-final.

“I chose the side I was going to go, it wasn’t the best executed penalty I’ve ever had,” Kane said. “Sometimes you miss and it falls your way and thankfully it did today. We dug deep and we got there when it mattered. We reacted really well – we’re in a final at home, what a feeling.” 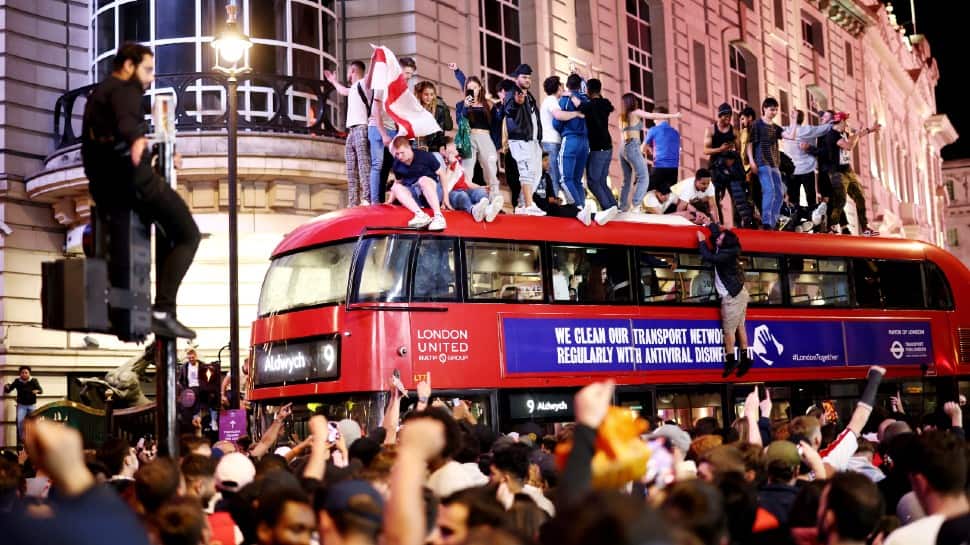 The Danes had taken the lead on the half hour through Mikkel Damsgaard’s superbly flighted free kick and this was an England team peering uphill for the first time this tournament.

Suddenly the smiling Southgate looked like a man pushing down on an overstuffed suitcase as he animatedly urged his players to keep their heads. “Calm down,” he mouthed, but he need not have worried about their composure.

If the hordes in the stands had been temporarily shaken, the 11 men on the pitch showed resolve and nine minutes later Simon Kjaer turned the ball into his own net with Raheem Sterling ready to pounce on a cross.

England looked the better side in most parts of the pitch, but struggled to find the final pass to unlock the Danish defence. For all England’s pretty tight patterns in the centre of the park, Denmark remained tight, disciplined and resolute, happy to let the English skitter the silvery ball between them, often with seemingly no real purpose.

Nerves jangled, fulltime came and went. The spectre of a dreaded shootout loomed, and then in the 104th minute Sterling went down under the lightest of challenges and up stepped Kane to propel England into their first final since the 1966 World Cup.

Some 60,000 white-and-red clad supporters screamed to the heavens. “Football’s Coming Home.” It might just be. A high-flying Italian side will have a major say on that matter in Sunday’s Wembley final, but on Wednesday it was joy unrestrained in London.

Will ‘Merkel mix’ set a trend of Covid-19 vaccine cocktails?

IND vs SA 2nd T20I: Another loss for India as Rishabh Pant and Co lose by 4 wickets | Cricket News

IPL 2021 DC vs CSK Qualifier 1 Live streaming: When and where to watch Delhi Capitals vs Chennai Super Kings? | Cricket News

All bluster or a real agent of change?, Auto News, ET Auto