Not everything is going as per plan at Ola land. The self proclaimed world’s biggest electric scooter company was supposed to start taking final payment of its maiden scooters–S1 and S1 pro from last Monday and begin deliveries from next Monday. Instead it has now pushed it back by at least 20 days. Ola would now take final payment only after November 10, when it intends to start offering test rides on a mass scale.

“It is incorrect to say we are not meeting our timelines. The only timeline we gave was a delivery window to customers and we will honour our commitments on that,” said Varun Dubey, the chief marketing officer at Ola Electric. “It is a better experience for customers if they make the payment after they have ridden the scooter. Which will happen from November 10 and the deliveries will start shortly thereafter. If the customer decides to cancel (his/her) order after the test ride, (he/she) gets the full refund. (Ola had taken a Rs 20,000 purchase order in September). No questions asked.”

The company is keen to play this down as just a niggle but it has kicked up a storm on social media. Besides making a forceful entry into electric mobility, Ola is also experimenting with new business models like not using the traditional dealer network for sales and service. Lack of sufficient information on how it intends to do so–road tax and registration of vehicles is a tedious process, has raised anxiety levels of the waiting customers. Moreover, Ola got pillaged for lack of transparency. 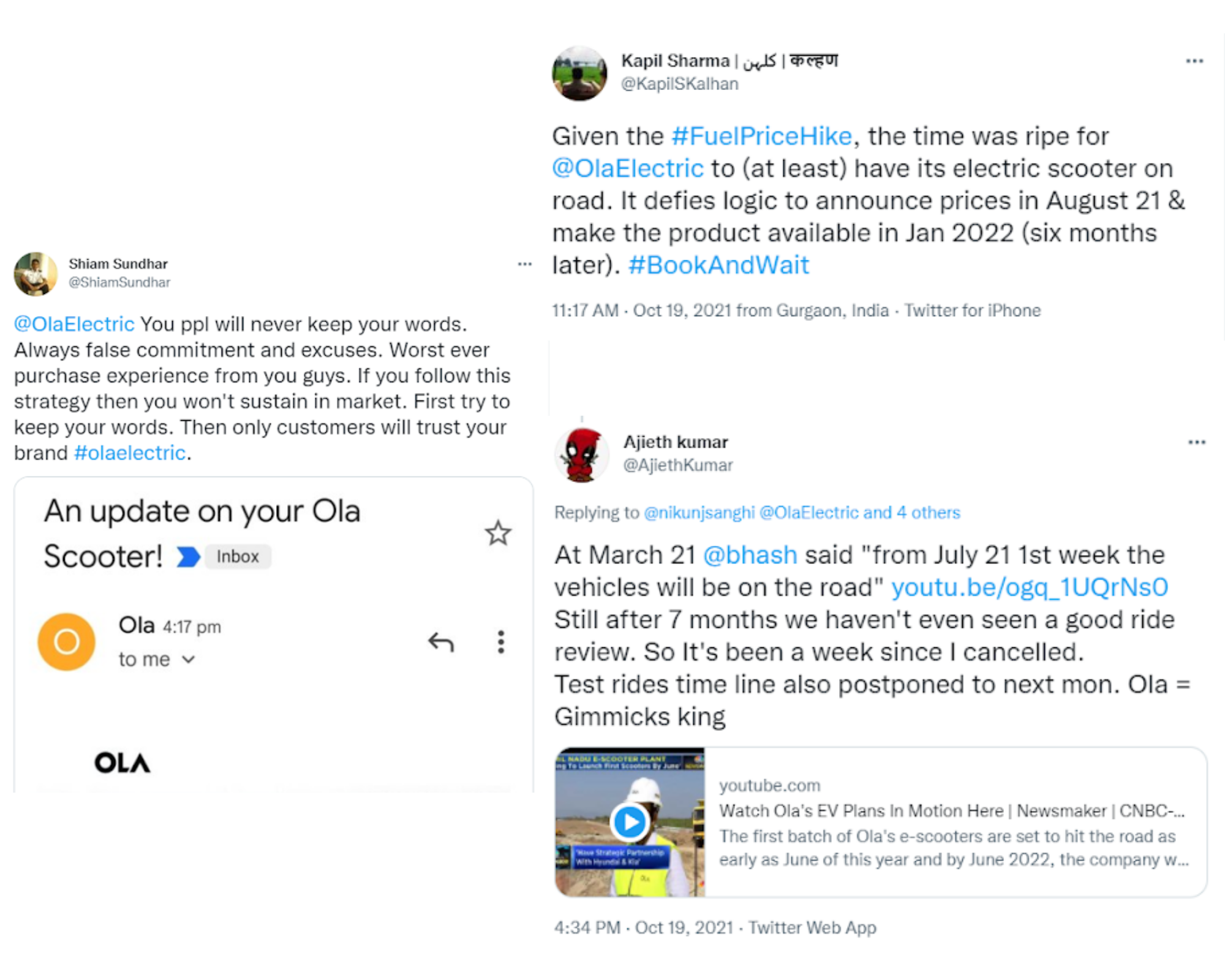 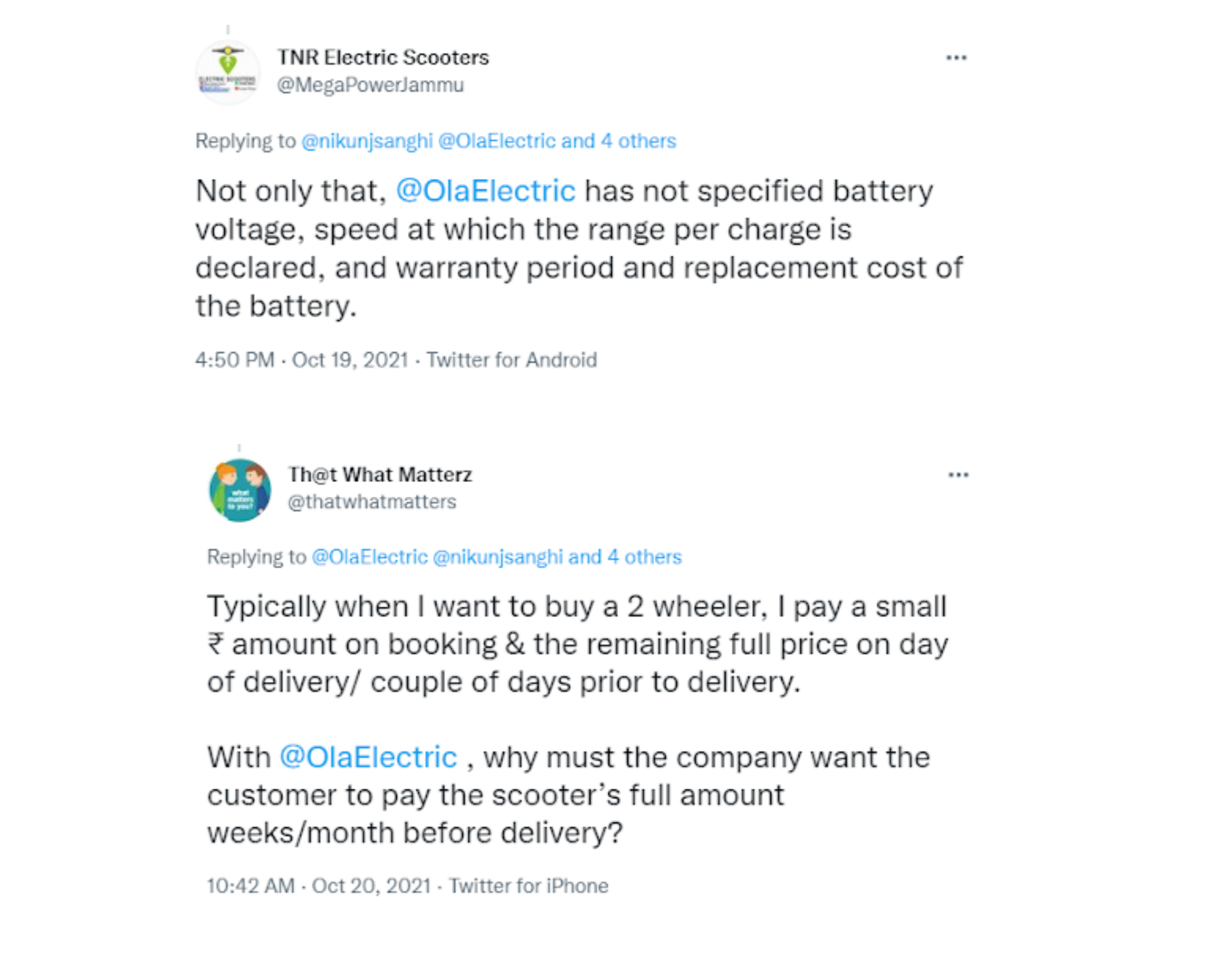 While accepting purchase bookings on September 16, which itself had got pushed by a week, Ola had indicated the first set of deliveries would happen from October 25 to November 25. Its website still says deliveries would begin from this month. Dubey is holding on to the promise and making use of the full duration of the window but it is clear now that no customer will get the scooter this month.

“It (deliveries) was supposed to start towards the end of October and 18th is when we were supposed to take payments,” Dubey said. “However we also realised that it is a much better experience for customers to pay the balance amount after the test ride. So November 10 is the date and it is for the first time that we’ve officially communicated a date for test rides.”

Except that it is not true. Till a few days back, the company’s website mentioned that the test rides would begin from October 25, the same day as the deliveries were originally supposed to start, which has now been updated to November. 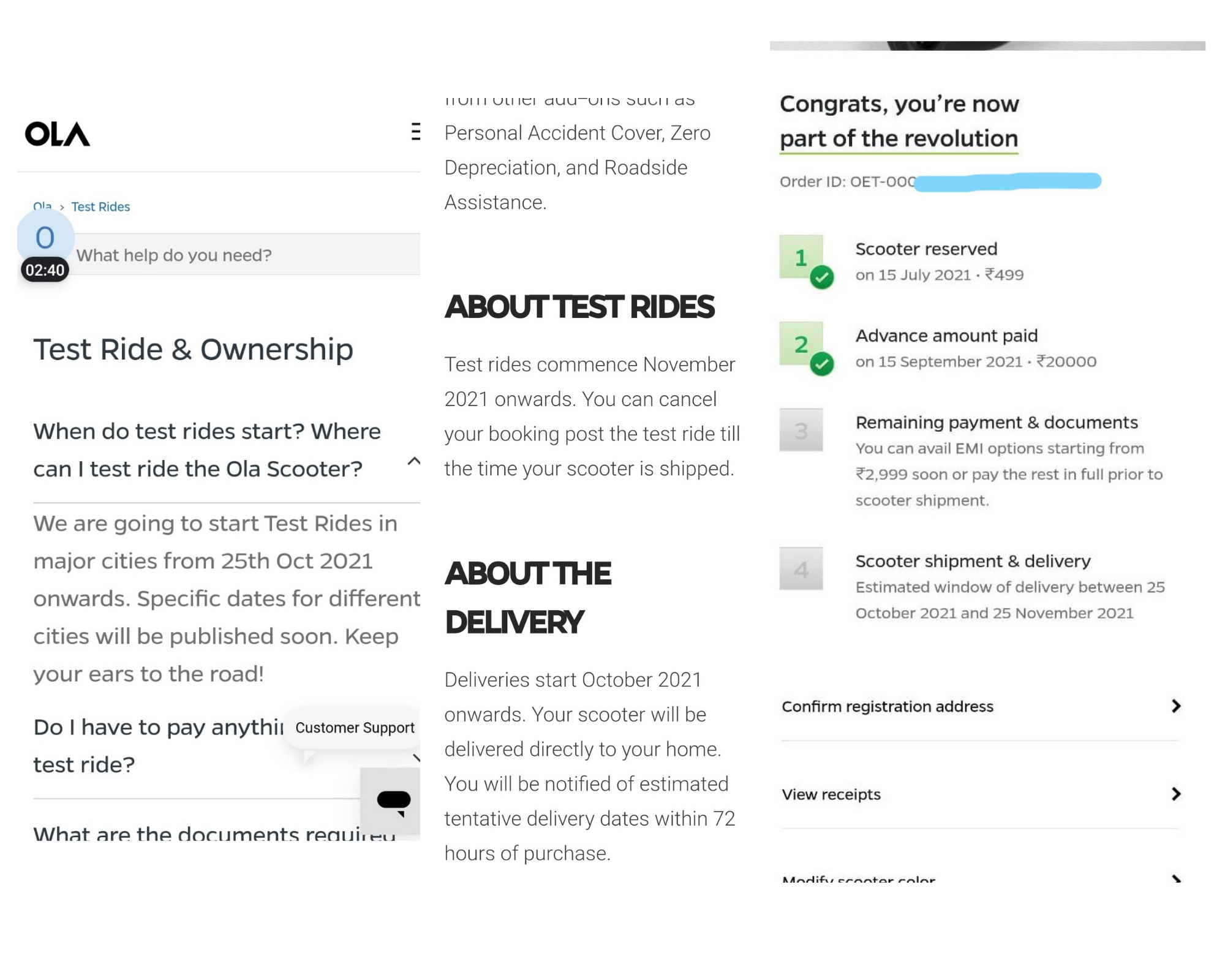 It is this flip flop, the desperate attempts at a cover up–better consumer experience is a convenient excuse, and a general lack of transparency that is putting Bhavish Aggarwal’s Ola story under the scanner. The desire to be the poster boy of electric mobility with a foundation built largely on hype has its weaknesses. Hype has a short shelf life.

“I am starting to have doubts. I got taken in by the hype and the media coverage that surrounded Ola,” says a young executive from Bangalore who has booked the scooter. ETAuto is withholding his identity.

“I hope I get the scooter next month. But I am now concerned about after sales. I use their cabs often and I have witnessed how the service has deteriorated after the pandemic. I fear the same with the scooter. After the sale, they may forget about me,” he says.

There are others who are at the receiving end of a long waiting period. The process of buying the Ola scooter itself is convoluted. First, you needed to book it with Rs 499 on July 15. Then you got a glimpse of the scooter with the price on August 15. Next up, you played fastest finger first over two days in mid September with an additional payment of Rs 20,000. If things go as per plan and Ola does manage to deliver on the timelines, those with a little less luck will get the scooter only sometime in February. Through various twists and turns in an age of instant gratification, it is a wait of at least 7 months.

“It is a bit unreal. Why did I opt for it and why am I still sticking with it? Because it was hyped so much that I wanted to see it for myself,” says an East Delhi based trader who is due to get his scooter in January. “If there is a delay, I will cancel my booking.”

At the core are lingering questions on whether the company is struggling to ramp up production at the massive 10 million unit per annum factory it has set up in Tamil Nadu. While founder Bhavish Aggarwal regularly tweets photographs of the factory and assembly lines, Ola is yet to share details of how many units it is currently producing or the ramp up schedule.

“For now, Ola looks like it is set up more to impress investors than its consumers. It is a startup and the name of the game is topline and valuations rather than profit and solid word of mouth publicity,” says an industry veteran.

Unfortunately, potential investors are unlikely to miss the heat being generated on social media. The flame needs to be doused and the scooters ought to finally hit the roads. It promises to be a busy working Diwali for all at Ola.

Bhavish Aggarwal’s Ola Electric is riding a wave of hype that is second only to Tata Nano of 2008. As a rank outsider, he has the opportunity to really change the dynamics of the industry but can he deliver?

BMW goes on a product offensive on EVs, to launch three models in next 6 months, Auto News, ET Auto

Objects in my book reflect the rich medley that is today’s India: Vidya Dehejia