In a first, two candidates attained full marks in medical entrance exam NEET, results of which were declared on Friday night, according to National Testing Agency (NTA) officials. Odisha’s Soyeb Aftab and Delhi’s Akanksha Singh have scored 720 out of 720 marks but Aftab has been ranked first and Singh second as per the NTA’s tie-breaking policy, the officials said.

The same tie-breaking policy has been used for deciding further ranks.

Candidates should know that NEET 2020 result can only be downloaded up to 90 days from the date of declaration. The results were announced at 5 pm at the NEET official websites and the candidates can visit websites–ntaneet.nic.in or at mcc.nic.in to check their marks.

Odisha’s Soyeb Aftab: A student of ALLEN Career Institute Kota for the last three years, Soyeb secured AIR 1. Shoaib became the first student in the country to score 720 out of 720 in the exam. Shoaib said that his dream is to serve the country by becoming a good cardiologist. He wants to study further in AIIMS, Delhi.

“I cleared all my doubts during the coronavirus period as there was extra time and I saw this period as an opportunity,” he said speaking to Zee Media. Shoaib’s mother Sultana Razia said that she wishes him to serve the poor people as a doctor. She added that years of penance have paid off. Sultana Razia also became emotional during the conversation with Zee Media.

He said, “There is no doctor in my family, so I didn’t expect this. I had hoped to make it to top 100 or top 50 but I never expected to score 720/720. The exam was being postponed, so there was a lot of pressure. But the goal was to stay calm and utilise time.”

He stayed away from home due to studies for the last three years and had the full support of his mother. “I used to think in my childhood that machines would cure people. I studied for 10 to 12 hours regularly. There was less attention to physical health during studies. I am glad I have not gone home during the coronavirus period. I said at home that I will come only after passing the exam,” he said.

Delhi’s Akanksha Singh: A student of Aakash Institute Kota, Akanksha secured AIR 2. She has been ranked second, despite having the same marks as that of Soyeb Aftab, because she is younger to him. She is the topper among the female candidates. 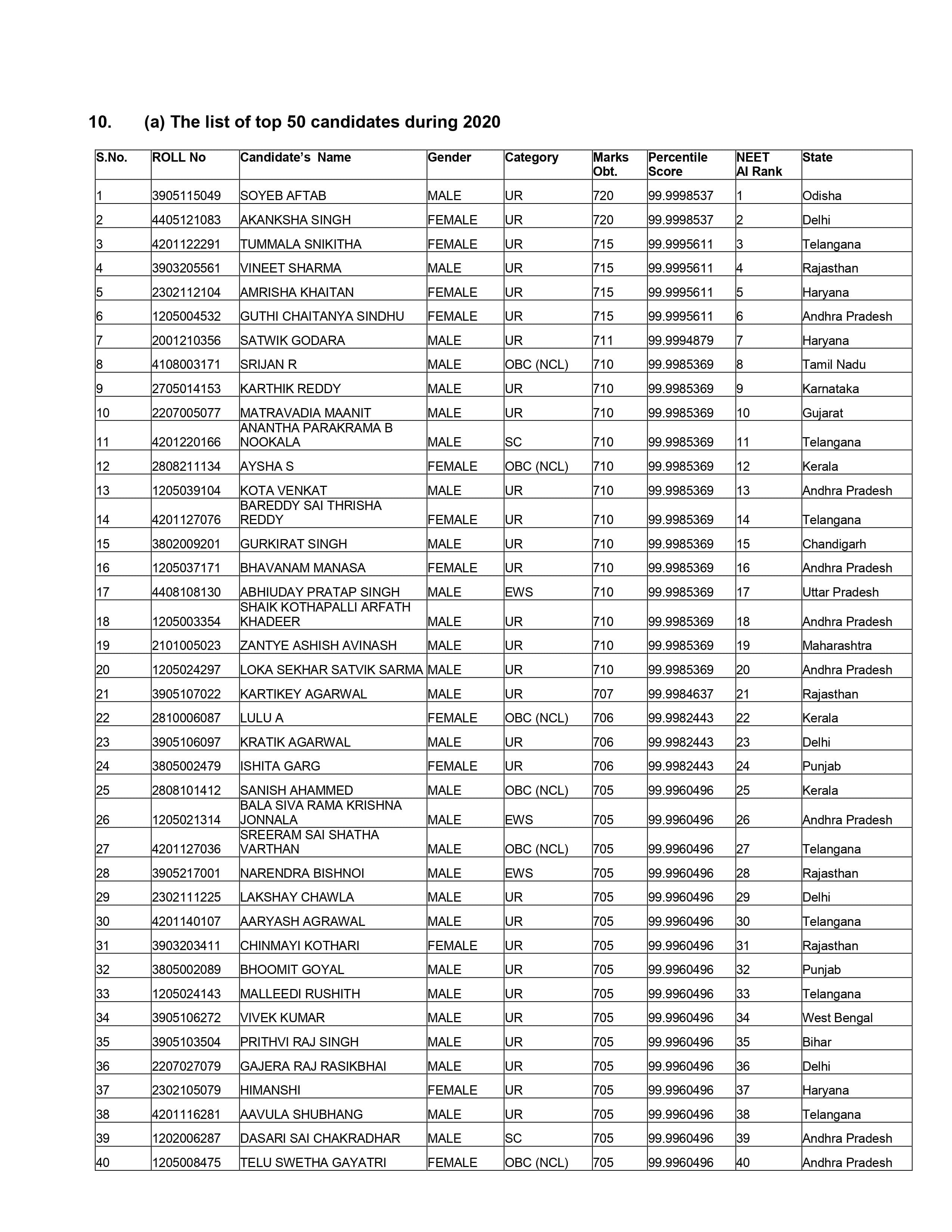 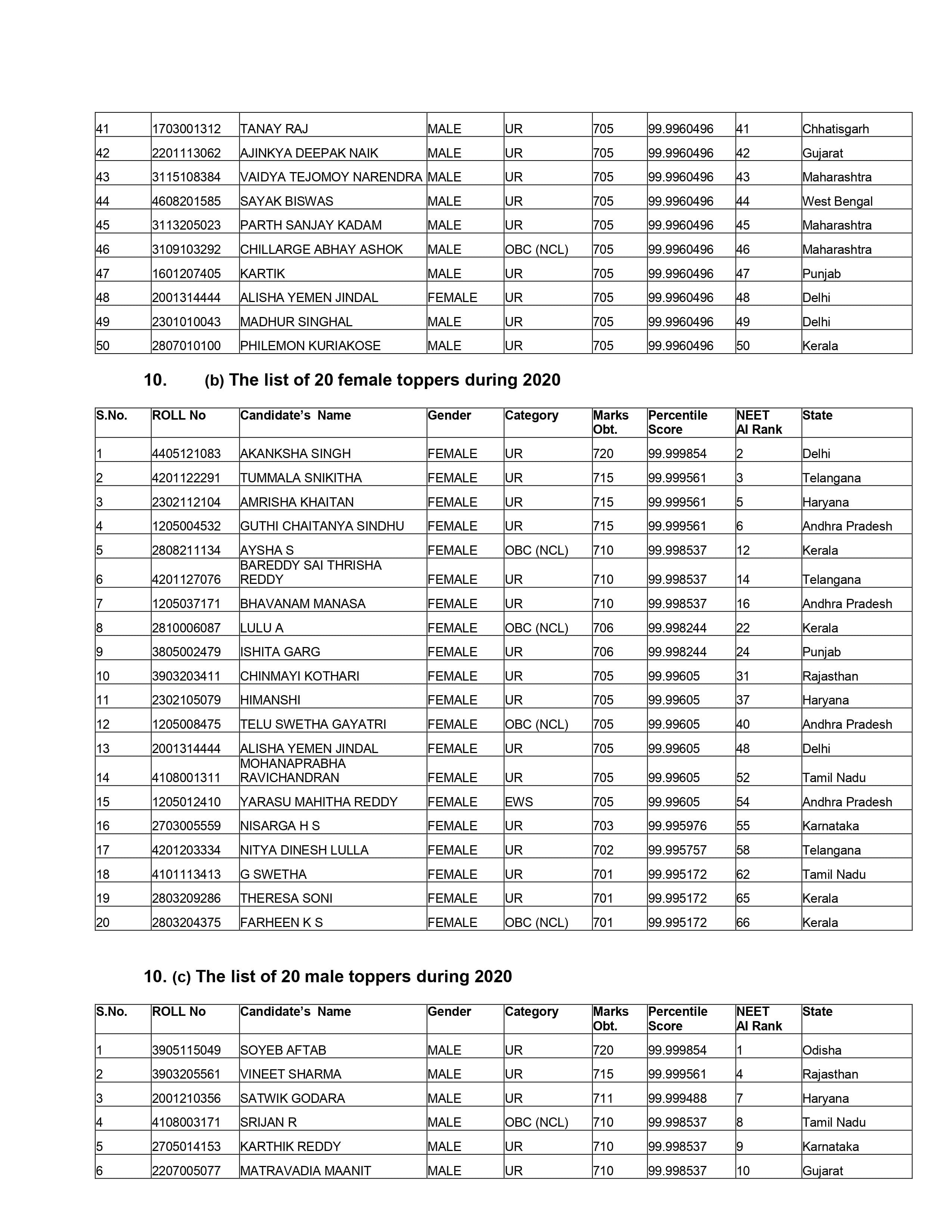 NEET candidates 2020: A total of 7,71,500 candidates have qualified the exam for which over 13.66 lakh candidates had appeared. The highest number of qualifying candidates are from Tripura (88,889) followed by Maharashtra (79,974).

Taking to micro-blogging site Twitter, Pokhriyal thanked the NTA for giving a new cohort of doctors this year. He said that the exams were conducted during “testing” times and the spirit of cooperative federalism was clearly visible.

“The result has been declared. I congratulate all candidates who have cleared the exam and wish them good luck for future. I thank NTA for giving a  new cohort of Doctors this year. Exams were conducted during “testing” times and the spirit of Cooperative Federalism was clearly visible. I thank all the Chief Ministers for the same,” he tweeted.

“Students who couldn’t make it, please don’t feel disheartened. Opportunities in other sectors are waiting for you. An exam cannot define you. The country needs your intellect and acumen in those sectors,” he tweeted.

The test was offered in 11 languages — English, Hindi, Assamese, Bengali, Gujarati, Kannada, Marathi, Odia, Tamil, Telugu and Urdu — this year. Based on the initial report, more than 77 per cent aspirants took the test in English, around 12 per cent in Hindi and 11 per cent in other languages.

The exam was earlier postponed twice due to the COVID-19 pandemic and the government decided to go ahead with it, despite opposition by a section, to mitigate any further academic loss. The National Testing Agency had set in place strict standard operating procedures in view of the pandemic, including measures like reducing the number of candidates per room from the earlier 24 to 12.

The NTA had also increased the number of centres from 2,546 in 2019 to 3,862 this year to ensure crowd management and staggered entry and exit protocols. Unlike the engineering entrance (JEE), NEET-UG, the medical admission test, is a pen and paper exam and held once a year.

Accordingly, the NTA had changed centres for a few candidates this week in compliance with social distancing norms and COVID restrictions. In many places, NTA also arranged buses and private vehicles to transfer candidates who arrived at the centres assigned to them earlier instead of the changed one.

While all the candidates were asked to go to the exam centres with masks and sanitisers, once they entered the centre, they were asked to use the three-ply masks provided by the examination authority. The NEET-UG was originally scheduled for May 3, but was pushed to July 26 and then scheduled for September 13.

COVID-19 vaccines: When and how will it become available; explained | World News