After more than a decade of trial and error, some of the world’s biggest carmakers have yet to get their India strategy right. That’s reflected in the sea of red ink on the domestic books of the likes of Renault, Nissan, Honda Cars, Honda Motorcycle & Scooter and Toyota Kirloskar in 2020-21.

The ones who got their strategy right and helped shore up profits and sales are the South Korean carmakers – Hyundai and Kia, which made its debut only in 2019 – thanks to their sharper thrust on localisation to be cost competitive.

From the business point of view , if we can improve capacity utilisation percentage it will contribute to our business. So we are trying to maximise our efficiency and production. Last year we faced some setbacks , but our projection for this year is that we will be profitableGaku Nakanishi, CEO, Honda Cars India

Much of that red ink was justified as all the automakers were in investment mode, expanding capacities and setting up new plants. Now, however, pressure is increasing on the emerging market arms to make more meaningful contributions. Potentially game-changing models, opening up new segments and creating a complete portfolio, and expanding capacities are some of the strategies lacking among most of these carmakers, said experts.Poor offtake of its products, leading to limited capacity utilisation and increasing accumulated losses, saw US auto firms such as General Motors, Harley Davidson and, most recently, Ford to exit the Indian market. 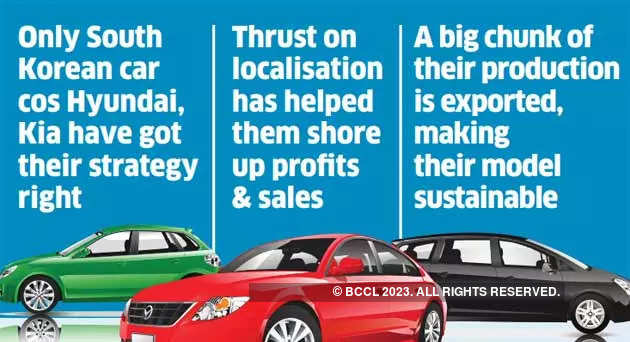 Multinational carmakers that have managed to make profits in India have been successful in pulling two levers – a big chunk of their production is exported and they have stepped up locally made parts in cars manufactured here. Hyundai did it almost a decade ago. In 2019, Kia made its debut in India with the Seltos as its first product. In just a year and a half, Kia has managed to sell more than 250,000 units and rank fourth in the passenger vehicle pecking order.

Honda Car India posted a loss for the second consecutive year, hurt by a fall in sales on account of Covid-19, cost on employee separation and accelerated depreciation expenses. With consolidation of its manufacturing footprint to one facility in Rajasthan after the closure of the Greater Noida plant last year, and halting production of the Civic and CR-V , Honda wants to come back to the growth trajectory, but not at the cost of profit.

European car companies’ business model does not work for India, especially in the mass market. These companies are still not Asian in their touch and feel and products lack India focusVenu Srinivasan, chairman, TVS Motor Co

During the year, Toyota successfully launched products as part of the Toyota-Suzuki global collaboration. Besides the launch of the full model change of Glanza, it plans to manufacture B-SUVs (sport utility vehicles) on a contractual basis for Maruti Suzuki from 2022 and increase the market share by consistent customer satisfaction and innovative marketing strategies.

Riding on the success of its new SUV Magnite, Nissan India posted growth during the fiscal despite a challenging phase. Renault’s resurgence in India was thanks to the launches of SUVs Triber and the Kiger.

Unless car companies scale up, economies of scale will not kick in. India is a value conscious market. Manufacturers need to localise at the mass market to be price competitiveKavan Mukhtyar, leader-automotive at PwC

Growth is limited if you have limited model offerings in your portfolio, said experts, and clearly global auto brands suffer from a scale problem. Huge investments are justified only if companies achieve a minimum production and sales, they said. For instance, a mass market car company needs a volume of 30,000 units per annum and a combined volume of 50,000 export and domestic units per annum to be sustainable.

He also said that there has been “robust demand” for several vehicle models this year, however, dealers are witnessing a sharp decline in spot buying due to low stock of vehicles.

Even though the demand for cars is upbeat this year, dealers have failed to cash in due to supply constraints triggered by global semi-conductor shortage. Vehicle sales on Dussehra plunged by 7.

Covid-19 Vaccine coverage: As India closes in on 100 crore shots, here’s the journey so far and road ahead

BMW goes on a product offensive on EVs, to launch three models in next 6 months, Auto News, ET Auto

Covid-19 Vaccine coverage: As India closes in on 100 crore shots, here’s the journey so far and road ahead

Will electric mobility be a harbinger of economic prosperity?, Auto News, ET Auto

Cristiano Ronaldo’s last game for Juve? When & where to watch Juventus vs Empoli | Football News

Privatising PSBs is the way to go