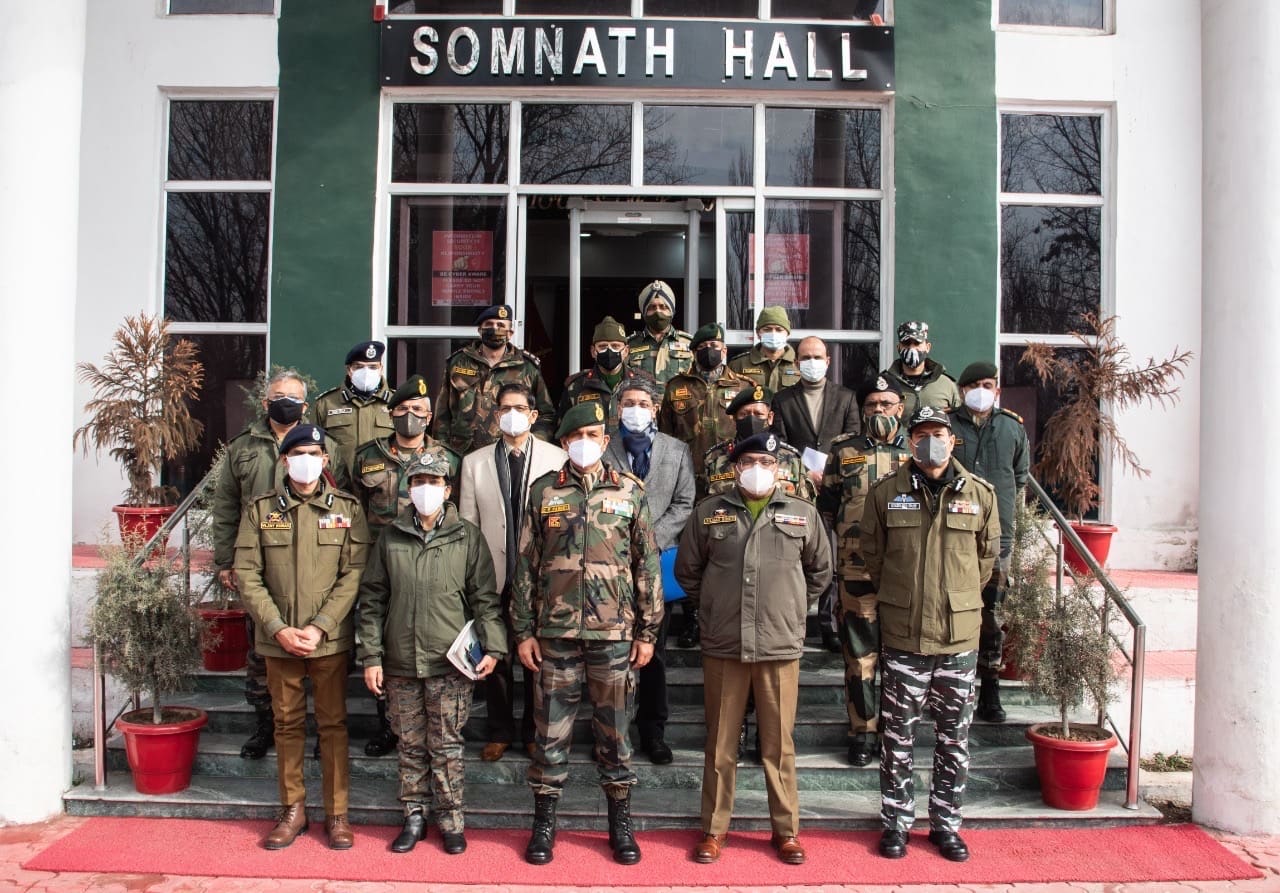 The core group reviewed the intelligence inputs and security parameters of 2021. The year 2021 witnessed a reduction in terrorist infiltration, reduced terrorist incidents, reduced terror recruitment, increased operations based on HUMINT, reduced collateral damage, no civil casualties in law and order situation, reduced SF casualties, increased arrest of terrorists and booking of OGWs; all pointing to effective conduct of joint operations and activities by intelligence and security agencies. There has been increased neutralization of Pakistani terrorists, in the last few weeks. The effort of the frontline soldiers and operatives of all agencies was acknowledged by all present.

The core group discussed fresh strategies of the terrorist organizations and their handlers including the use of Hybrid terrorists and targeting of soft targets. 15 terrorists killed in 2021 were fresh names not on the security forces radar.

The setting up of SIA and the increased booking by NIA is showing impact of focused intelligence and investigation efforts. These efforts have been effective in targeting drug, hawala and the OGWs networks. Legal action on those willfully harbouring terrorists is being increased as the harbourers have direct involvement in terror activities.

The officials stated that the ceasefire has improved the security situation along the border, however, intelligence inputs of terrorist launch pads and terrorist training activities in Pakistan indicate the need to be alert along the Line of Control.

The officials shared the challenge of propaganda of the nexus through internet and social media. “Sadly, these efforts include propaganda to legitimise killing of Kashmiri civilians by the terrorists. The use of social media to spread disinformation is widespread and needs to be countered proactively by a joint effort. Efforts at synergy in exposing fake news, booking of radicals trying to foment unrest and proactive sharing of information by state agencies are being upgraded,” a defence spokesperson said.

The DGP and the Corps Commander commended the officials present on improved security indicators. They appreciated that post the abrogation of Article 370, certain benchmarks were set, which have been achieved successfully for the restoration of peace and prosperity in the region.

The DGP stated that reduction in local terrorist recruitment is one parameter that all must approach with continued focus. A special mention was made on the measures taken to minimize the collateral damage in operations despite the risk to own soldiers. He recommended continued efforts to give a chance of surrenders to local terrorists to give them a second chance at living a fruitful life.

The Corps Commander called upon all to treat 2022 as a transformative year where common man used to zero civilian casualties in 2021 should see 2022 as the year when things turned for good for the long term. He cautioned the trend of the terrorists to use urban areas with thick built-up area for operations as they provide more avenues to hide or escape and puts higher onus in security forces to exercise restraint to avoid collateral damage. He expressed satisfaction at low SF casualties in 2021 by better intelligence-based operations and improved tactical drills.

It was decided to continue the efforts along with the civil society to counter the separatist propaganda and break the cycle of violence for long-term peace in Kashmir.

IND vs SA: India's disastrous tour continues as they lose ODI series 2-0 with one match to go | Cricket News

Gold prices likely to remain firm despite Fed's tightening in 2022

Gold prices likely to remain firm despite Fed's tightening in 2022